In essence geothermal energy is heat from the earth which is caused by the sun’s year round constant heating of the earth to 45 to 70 degrees Fahrenheit.  Geothermal energy is a natural and renewable resource which can be harnessed through geothermal heating and cooling systems to cool and heat a home in the summer and winter months.

The basic principles of ground water geothermal wells are quite simple.  The well water maintains a constant temperature all year round of 50 degrees Fahrenheit several miles below the ground’s surface.  The well pump and piping in the well absorbs and transfers the water and heat of said water to the geothermal heat pump inside the building.  Once there the geothermal heat pump concentrates and transfers the heat from the water to the buildings forced air ducts or radiant piping.  In the summer forced air systems extract the heat from the air inside the home leaving the air cooler.

There are two different types of geothermal wells that Chevalier Drilling Co., Inc. installs and they are as follows: Standing Colum and Closed-Loop.  Our certified drillers and pumping installers install both residential and commercial geothermal constructs. 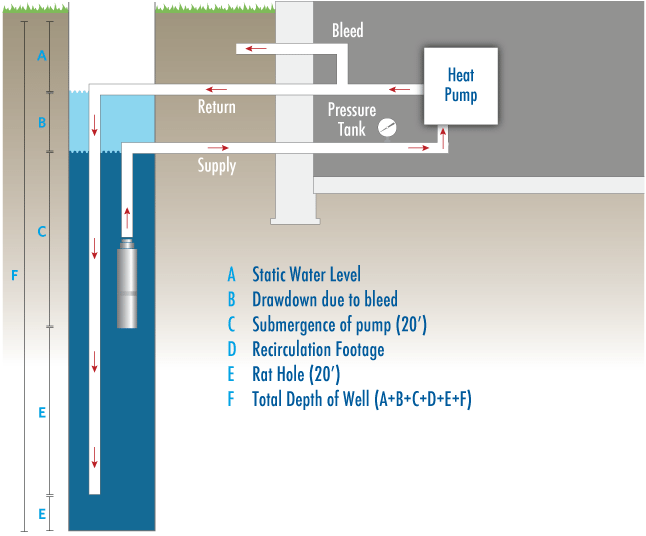 A closed loop geothermal well is a drilled borehole (well) with two parallel high-density polyethylene pipes (HDPE) grouted the full length of the well.  There are typically two or more closed loop wells piped together.  A water-based glycol solution is pumped through the closed-loops, to the heat pump which then extracts heat energy from the fluid.  The temperature of the water, just as in the open loop system, is decreased.  The fluid is then returned to the HDPE pipes where that heat that is in the ground has transferred through the grout and warms the fluid back up naturally.  Unlike standing column geothermal wells only deal with the heating aspect and not the domestic drinking water, therefore they are not dependent upon striking water at all.

If you are interested in geothermal please give Chevalier Drilling Co., Inc. a call.  Let our panel of experts help you with your quest towards an economical, environmentally safe renewable resource energy saving option!